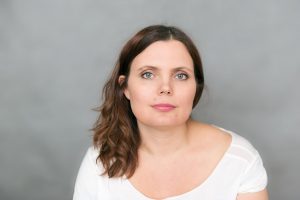 If I had not taken up the Culture Animation specialization, I probably would have changed the area of my studies. What was most important for me there were the internships at various culture institutions and the co-financing of my one-year original internship at the Węgajty Theatre.

Culture animator, author and coordinator of projects with the participation of refugees, director of the documentary play Historie Ziny. Co-author of hip hop projects e.g. at the correction centre for girls in Falenica, in Warsaw’s middle schools, with youth in Trawniki (Lubelskie region). Since 2001, she collaborated with the Węgajty theatre on various projects with local youth and on the organisation of the Theatre Village festival.

Co-founder and member of the board (until 2017) of the Culture Practitioners Association. Initiated and executed the so-called Congo Dinners (2012) project where refugees from the Democratic Republic of Congo cooked and sold meals. Co-founder and chairperson of the Convivo Social Cooperative where she is the project manager of Babel Bar. The Cuisine of Many Cultures project as part of which refugee women living in Poland cook their national dishes and run a foodtruck and catering service.