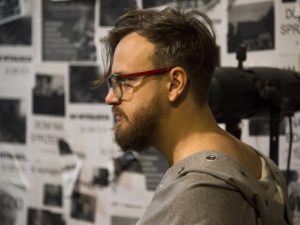 What I found as a revelation during the Culture Animation specialization was the translation of theoretical knowledge to practical actions, which turned out to be valuable competence especially in the work of a dramaturgist in the theatre or curator.

Works at the Institute of Polish Culture at the University of Warsaw and at the editorial office of Dialog periodical. At the Institute of Polish Culture he conducts classes in the history of culture and contemporary theatre. At Dialog, he works as editorial coordinator and writes about contemporary Polish theatre. Also publishes play reviews in Dwutygodnik.com.

Has been collaborating with the Zbigniew Raszewski Theatre Institute on research projects for ten years now (e.g. Theatre Architecture in Central Europe, Public Theatre); also curated performative play readings The Dramas of the Enlightened). Together with Jolanta Woszczenko, he was the curator of the 10th edition of the InOut festival organised by the Łaźnia Contemporary Art Centre in Gdańsk. Collaborated as a dramaturgist with Michał Kmiecik on the plays “Krakowiacy i Górale” at the Polski Theatre in Poznań and “Słowo o Jakóbie Szeli” at the Silesian Theatre in Katowice.