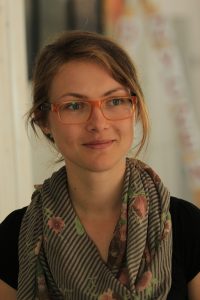 Studies at the Culture Animation specialization are a wonderful memory for me. I got the most from workshops in Węgajty Theatre and the study tour in London as part of the Localise project. It was there where I got to know better and became fascinated with community arts.

Graduate of the Ethnology and Culture Anthropology Department as part of the MISH UW interdisciplinary faculty and the Culture Animation specialization.

Her dream job was to coordinate the multi-generational project Common Story about Grochów- Intergration of Generations at the PACA 40 Social Centre, performer – member of the Restauracja Europa Group, for 15 years has been involved in the Interakcje festival. Member of the Board of the Pracownia Nauki i Przygody Foundation. Many-year scouts instructor.

She deals with the revitalisation of endangered languages, in particular the wymysiöeryś (wilamowski) language as a part of the Enghum – Engaged Humanities at the University of Warsaw. By organizing cultural events and caring about communication with recipients, she raises awareness of the interdependencies between art and language and science. She organised, among others, the Language Diversity Week which covered photo exhibitions, poetry readings and the Voices of Diversity concert featuring performers singing songs in endangered languages.

She moved with her two children and her husband to Beskid Mały. She has just began working on a inter-generational project in a district of Bielsko-Biała.