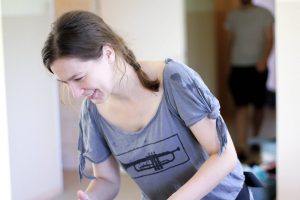 The studies were a time for formational journeys for me. I owe a lot to the participation in field work research in the Wałbrzych region under dr Tomasz Rakowski. I had been travelling to the countryside to research music, dance and meet people before, still the experience gathered in the bootleg mining puts impacted my later research and music activities. During the studies I took part a number of times in creative workshops organised by the Bielefeld University to which I owe some great friendships and inspiration for my scholarship project in Stockholm. The blend of these experiences and milieus resulted in pursuing a career in the film industry after graduation and I worked as the head of film production for eight years.

Animator of events popularising non-styled traditional music, in particular as part of the projects held by the Dom Tańca Association, among others she organised the Dom Tańca Festival in Ostałówek, Becejły and Sędek. The Spiritus movens of the Embassy of Traditional Music at the Warsaw Jazdów centre – it is a meeting place, venue for workshops, debates dedicated to music and rural culture.

Collaborates with the Tratwa Association on educational projects and in researching for tools to recreate the rural communities with their musical heritage.

Drum player – plays the baraban in the Tęgie Chłopy band performing traditional dance music from eastern Kielce region. She enjoys dancing to music played by others.