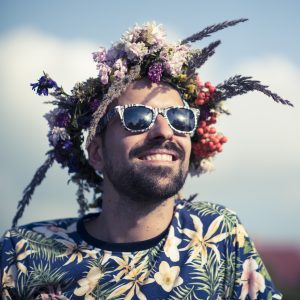 The specialization made me realise what I wanted to do in life. It blended the theory learned during the studies and my experience of being a member of a theatre group at the time, equipping me with tools to act. My best memories are those of theatrical workshops, I took part in lots of them, including at the Węgajty Theatre, Academy of Movement, Song of the Goat Theatre… I would not have been able to afford them if it were not for the specialization. Most likely I would not have heard of them at all.

Coordinator of the internet+animations at the graphic design studio Rzeczyobrazkowe and Chairman of the Board of the Association of Culture Practitioners. Every now and then he works as an anti-discriminatory trainer, culture animator, film animator, photographer and graphic designer.

At Rzeczy Obrazkowe, he also runs a workshop in identifying goals, target groups in the context of designing visual identification or websites. The company also appreciates David’s competence in counteracting discriminatory behaviour and culture animation which are useful in executing assignments in this area.
At the Association of Culture Practitioners he works as a culture animator and an anti-discriminatory trainer. He also deals with visual identification and the documentation of our work. He occasionally walks on stilts.