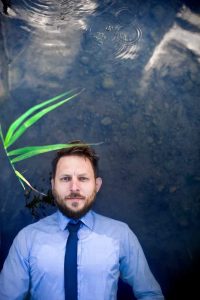 Owing to the studies I now put man in the centre stage of the world along with his creative attitude and in relations with the surrounding reality I strive after interpretation and understanding.
In the years 1995-2001 involved in the activities of the Borderlands – Centre of Arts, Culture and Nations where he took part in the production of plays (e.g. Dybuk, Wijuny), former member of the Klezmer Orchestra and participated in culture animation projects.

In 2006, together with his friends he founded the Miasto Foundation whose mission was to disseminate knowledge about the culture of the city. Apart from music, theatre and film workshops, concerts and training on management for local leaders, he also co-authored publishing projects (e.g. the nation-wide quarterly Kultura Miasta.

Co-founder of the Code & Pepper (2010) company where he is a member of the board responsible for business development. Code & Pepper is an agency focusing on the FinTech sector offering support for businesses from Great Britain, Denmark, Switzerland and the USA in building their digital products. Among them are the most promising companies supported by Barclays Bank. The story of Adam and Code & Pepper was featured in Filip Springer’s book Miasto Archipelag.